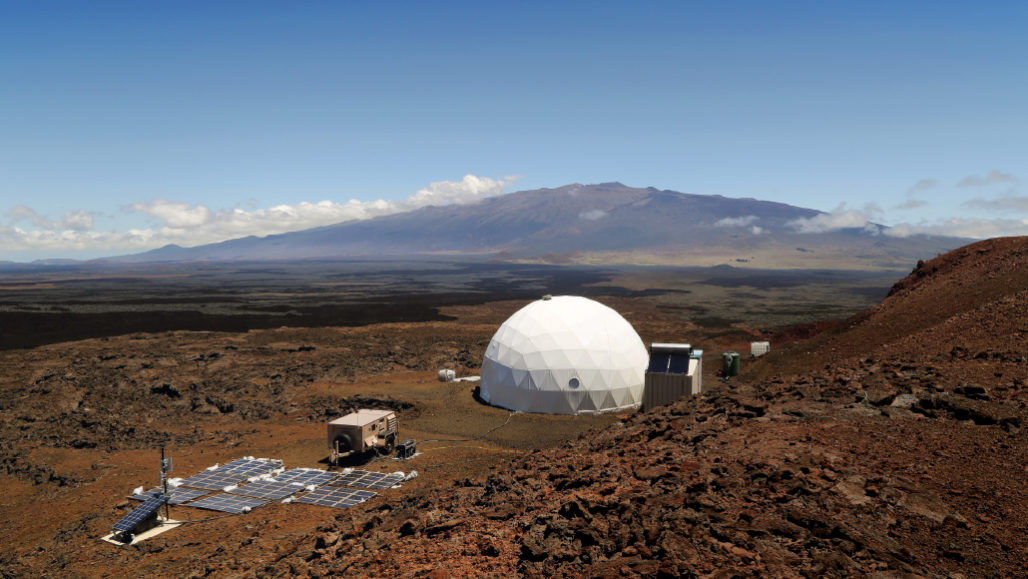 Science writer Kate Greene couldn’t have known that her memoir about her time on a make-believe Mars mission would be published as millions of people on Earth isolated themselves in their homes for months amid a pandemic.

Once Upon a Time I Lived on MarsKate GreeneSt. Martin’s Press, $27.99

But her book is one of two about Mars published this month that are oddly well-suited to the present moment. Once Upon a Time I Lived on Mars and Sarah Stewart Johnson’s The Sirens of Mars are both about exploration. Yet they’re also about many different types of isolation and the human yearning to not be alone.

Greene participated in a mock Mars mission, called HI-SEAS, for Hawaii Space Exploration Analog and Simulation, in 2013. She and five others lived in a dome on a rocky, barren patch atop Mauna Loa volcano for four months with no fresh food, no fresh air (all excursions were conducted in clunky “spacesuits”) and no instantaneous contact with the outside world.

NASA and other space agencies run such missions to figure out best practices for keeping astronauts sane and productive in isolated and stressful environments. It’s well-documented that boredom can lead to mistakes or inattention. Other simulated Mars missions suggest that astronauts isolated together could develop an us-versus-them mentality that would lead the crew to stop listening to mission control, which could be dangerous on a long mission.

With humor and sensitivity, Greene relates how her crew got along (or didn’t), what she read, what she ate and the time-delayed e-mails she exchanged with loved ones back on “Earth.” Through the book’s series of essays, she uses the mission as a lens to examine everything from the ethics and economics of space travel to the nature of time, love and home.

Her descriptions of boredom and seclusion feel especially apt in a time of social distancing: “the way certain aspects of your environment, daily schedule and conversations smooth over, lose their texture.” Greene relates her experience to astronaut Michael Collins’ time orbiting in the Apollo 11 capsule alone while his crewmates walked on the moon. She connects both of those experiences to that of her brother, who spent the last year and a half of his life confined to a hospital room.

“On this oasis of a planet,” she writes, “there are so many ways to feel isolated, each of us with the potential to sit with the terror of being alive and possibly alone in the cosmos.”

The Sirens of Mars starts with a much broader view of Mars exploration. In lyrical, engaging writing, Stewart Johnson, a planetary scientist, chronicles how our perception of Mars has swung from a world teeming with life, to definitely dead and boring, and back again over and over since the invention of telescopes.

Stewart Johnson brings together a cast of characters to tell this history, from Galileo to the present-day team working on the Curiosity rover. Those characters include astronomer Carl Sagan, whose Cosmos TV series Stewart Johnson watched as a child. Sagan was almost ridiculed out of science for his obsession with “exobiology.”

She also introduces less famous but equally important people, like Sagan’s colleague Wolf Vishniac, whose “Wolf Trap” life-detection experiment was cut from NASA’s life-hunting Viking landers in the 1970s. To get over his disappointment, Vishniac went searching for microbes in Antarctica and died in an accident there before the Viking missions launched (SN: 12/22/73).

In this sweeping history of human fascination with the Red Planet, Stewart Johnson also tells a personal story of finding her place in the world, from an inquisitive child to an unrooted adventurer to a wife and mother and member of a scientific team.

She makes a clear case that the search for life on Mars is an effort to not be alone. In one of the most poignant scenes in her book, she is hiking on Mauna Kea — the next volcano over from Greene’s Mars habitat — and finds a fern growing amid the volcanic desolation.

“It was then, on that trip, that the idea of looking for life in the universe began to make sense to me,” she writes. “I suddenly saw something I might haunt the stratosphere for, something for which I’d fall into the sea…. a chance to discover the smallest breath in the deepest night and, in so doing, vanquish the void that lurked between human existence and all else in the cosmos.”

Click the book titles or covers to buy from Amazon.com. Science News is a participant in the Amazon Services LLC Associates Program. Please see our FAQ for more details.