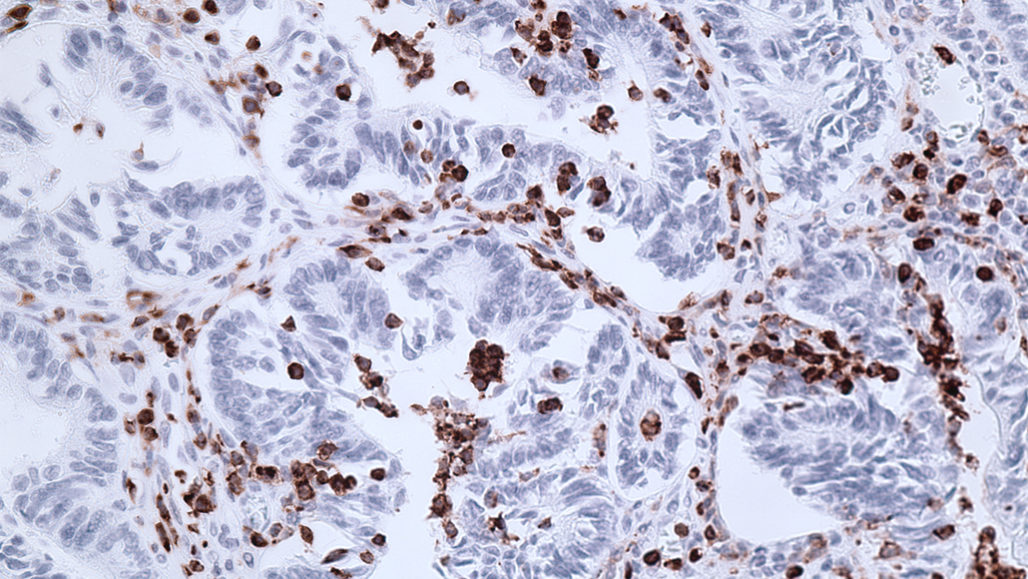 These cells slow an immune response. Derailing them could help fight tumors

Drugs that release brakes on the immune system have helped thousands of people with cancers that were previously untreatable. Yet these therapies, known as checkpoint blockers (SN: 10/1/18), fail in many patients and work poorly for some cancers. That’s because the body’s defense system can stall in more than one way.

Checkpoint blockers traditionally target a particular set of brakes: protein interactions that disarm the body’s T cells, allowing cancer to grow unchecked. But an additional brake may be at work as well — an immune cell population called myeloid-derived suppressor cells, or MDSCs. These cells reach unusually high levels in people with cancer.

Now, experiments in mice suggest that immune checkpoint therapies could get a boost if paired with other drugs targeting MDSCs. Researchers reported their initial findings at the annual meeting of the American Association for Cancer Research, held virtually in late June.

MDSCs are a mix of immature cells from the same family as neutrophils and macrophages, which act as general first responders in the immune system. MDSCs caught scientists’ attention decades ago, but it wasn’t until the last several years that their importance in cancer came into focus.

“Their normal function is to slow things down,” says William Carson III, a surgical oncologist at Ohio State University in Columbus. Disabling them, Carson thought, might allow the immune system to launch a speedier attack on cancer cells.

In a 2016 study of people who received checkpoint blockers for advanced melanoma, patients with lower levels of MDSCs in their blood responded better to the immune therapy and lived longer. That made Carson and his colleagues wonder if getting rid of the suppressor cells could create an environment for checkpoint blockers to work better. And they knew a class of drugs that could potentially achieve this: Brd4 inhibitors.

In tumor cells, the protein Brd4 regulates the activity of various genes — including some that promote MDSCs. So perhaps a Brd4-inhibiting drug would give checkpoint blockers free rein to do their job.

To test the idea, Andrew Stiff, a physician-researcher in Carson’s lab, conducted studies in mice with implanted breast tumors — a type of human cancer that responds poorly to checkpoint blockade. Among mice treated with the checkpoint blocker anti-PDL1, tumor growth slowed in three of 11 animals. Mice treated with a placebo drug or Brd4 inhibitor alone fared worse. A third group of animals received combination therapy, anti-PDL1 and a Brd4 inhibitor, which aimed to release the brakes on T cells and curb the suppressor cells at the same time. Tumors shrank in seven of 11 of those mice, Stiff reported June 24 at the AACR meeting.

Treated mice had fewer MDSCs in circulation and at the tumor site. Other experiments suggested Brd4 inhibitors can influence MDSCs in several ways — including killing them directly or suppressing a molecule that drives their growth and expansion.

The team got similar results with several different Brd4 inhibitors and in mice with breast, colon or lung tumors. Though preliminary and unpublished, the findings suggest that Brd4 inhibitors “can get rid of these immune suppressor cells that are an additional brake on the immune system, and allow immune stimulating drugs to work better,” says Carson.

There are other ways to target those suppressor cells. Timothy Wang, a gastroenterologist at Columbia University Irving Medical Center, and his colleagues went after them using an anti-inflammatory peptide called trefoil factor 2, or TFF2. Previously, Wang and colleagues showed that some T cells release TFF2 to tone down inflammatory responses, and that giving mice TFF2 can boost the immune system and slow tumor growth.

In a new study, a team led by Wang and cancer biologist Woosook Kim chemically stimulated mice to form colorectal tumors. Some animals had genetic manipulations that led them to produce a lot of MDSCs and grow tumors quickly, the team reported June 22 at the virtual AACR meeting.

Like human patients, these mice responded poorly to anti-PD1 immune therapy. However, combining TFF2 and anti-PD1 shrank tumors in all five animals with aggressive cancer.

Synthesizing TFF2 for this pilot study was expensive, Wang says, so his team could test only a single dose on a small number of animals. “The fact that we could get any responses here, and that we showed some degree of synergy with anti-PD1, is very encouraging,” Wang says.

However, a drug’s effectiveness in mice has traditionally shown little correlation with its impact in human patients. For example, anti-PD1 and anti-PDL1 therapies only modestly slowed tumor growth in mice — yet today they’re “the cornerstone for immuno-oncology therapy in humans … and well-tolerated,” Peng says. Another case in point: STING agonists. These drugs, which activate a slew of host defense genes, worked like gangbusters in mice yet have floundered thus far in clinical trials.

More than a thousand other trials are currently testing checkpoint blockers, alone or in combination with additional drugs and some, like one in people targeting advanced non-small cell lung cancer, are showing some promise. Yet the immune system is so sophisticated, with layers upon layers of brakes, that existing approaches may be “just scratching the surface,” says Peng.