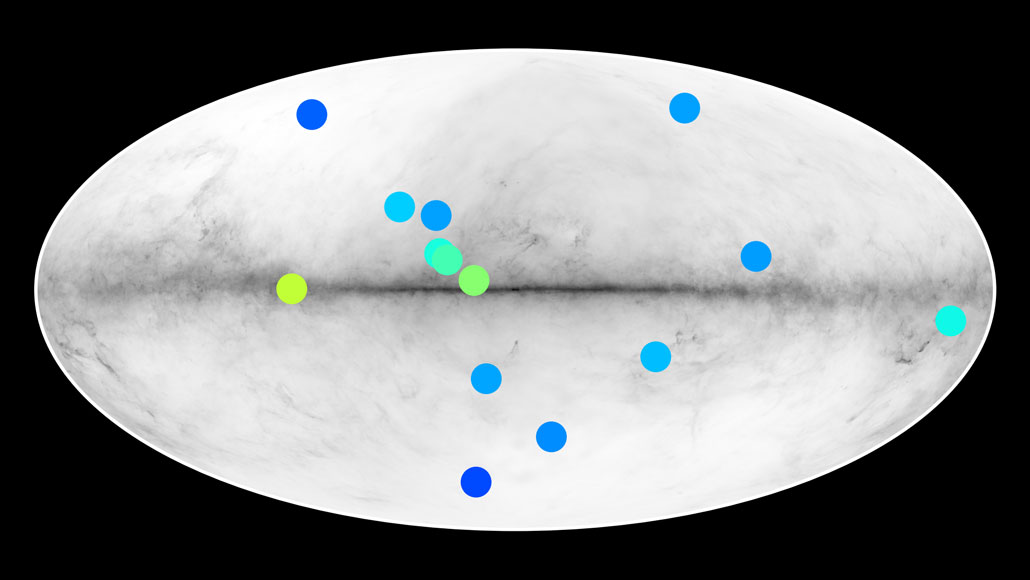 Stars made of antimatter could lurk in the Milky Way

Fourteen pinpricks of light on a gamma-ray map of the sky could fit the bill for antistars, stars made of antimatter, a new study suggests.

These antistar candidates seem to give off the kind of gamma rays that are produced when antimatter — matter’s oppositely charged counterpart — meets normal matter and annihilates. This could happen on the surfaces of antistars as their gravity draws in normal matter from interstellar space, researchers report online April 20 in Physical Review D.

“If, by any chance, one can prove the existence of the antistars … that would be a major blow for the standard cosmological model,” says Pierre Salati, a theoretical astrophysicist at the Annecy-le-Vieux Laboratory of Theoretical Physics in France not involved in the work. It “would really imply a significant change in our understanding of what happened in the early universe.”

It’s generally thought that although the universe was born with equal amounts of matter and antimatter, the modern universe contains almost no antimatter (SN: 3/24/20). Physicists typically think that as the universe evolved, some process led to matter particles vastly outnumbering their antimatter alter egos (SN: 11/25/19). But an instrument on the International Space Station recently cast doubt on this assumption by detecting hints of a few antihelium nuclei. If those observations are confirmed, such stray antimatter could have been shed by antistars.

Intrigued by the possibility that some of the universe’s antimatter may have survived in the form of stars, a team of researchers examined 10 years of observations from the Fermi Gamma-ray Space Telescope. Among nearly 5,800 gamma-ray sources in the catalog, 14 points of light gave off gamma rays with energies expected of matter-antimatter annihilation, but did not look like any other known type of gamma-ray source, such as a pulsar or black hole.

Based on the number of observed candidates and the sensitivity of the Fermi telescope, the team calculated how many antistars could exist in the solar neighborhood. If antistars existed within the plane of the Milky Way, where they could accrete lots of gas and dust made of ordinary matter, they could emit lots of gamma rays and be easy to spot. As a result, the handful of detected candidates would imply that only one antistar exists for every 400,000 normal stars.

If, on the other hand, antistars tended to exist outside the plane of the galaxy, they would have much less opportunity to accrete normal matter and be much harder to find. In that scenario, there could be up to one antistar lurking among every 10 normal stars.

But proving that any celestial object is an antistar would be extremely difficult, because besides the gamma rays that could arise from matter-antimatter annihilation, the light given off by antistars is expected to look just like the light from normal stars. “It would be practically impossible to say that [the candidates] are actually antistars,” says study coauthor Simon Dupourqué, an astrophysicist at the Institute of Research in Astrophysics and Planetology in Toulouse, France. “It would be much easier to disprove.”

Astronomers could watch how gamma rays or radio signals from the candidates change over time to double-check that these objects aren’t really pulsars. Researchers could also look for optical or infrared signals that might indicate the candidates are actually black holes.

“Obviously this is still preliminary … but it’s interesting,” says Julian Heeck, a physicist at the University of Virginia in Charlottesville not involved in the work.

The existence of antistars would imply that substantial amounts of antimatter somehow managed to survive in isolated pockets of space. But Heeck doubts that antistars, if they exist, would be abundant enough to account for all the universe’s missing antimatter. “You would still need an explanation for why matter overall dominates over antimatter.”