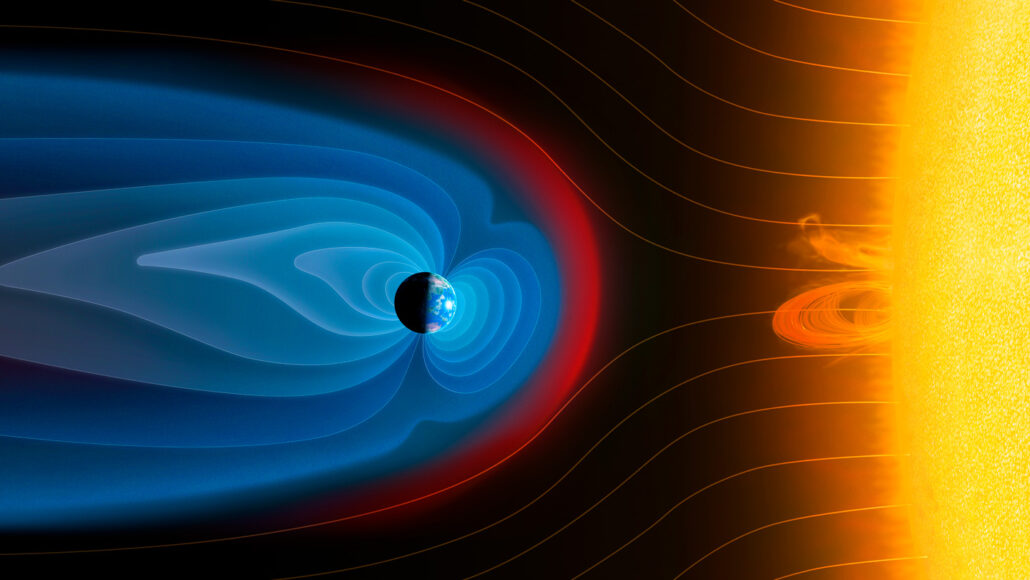 A new experiment suggests that the subatomic particles can be accelerated by a process akin to surfers catching waves. The protons get a speed boost not from ocean swells, but from shock waves within plasma, a mixture of electrically charged particles. Such shock waves are sonic boom–like disturbances marked by an abrupt increase in density, temperature and pressure.

The research could help scientists better understand some of the high-energy particles that zip through the cosmos. Shock waves in space are thought to propel charged particles, but it’s still not fully understood how particles get their pep (SN: 11/12/20).

In the experiment, which mimicked certain types of cosmic shock waves, protons reached energies up to 80,000 electron volts, physicists report August 19 in Nature Physics. In space, similar shock waves occur where the outflow of charged particles from the sun meets the Earth’s magnetic field, for example, and also where those particles slow down dramatically as they approach the edge of the solar system, at what’s called the termination shock (SN: 10/4/13).

The scientists used powerful lasers to re-create the physics of such cosmic shock waves on a smaller scale. In the experiment, a laser blast vaporized a target, sending a burst of plasma careening into a cloud of hydrogen gas. As the plasma plowed through the gas, a shock wave formed, and protons from the gas sped up, measurements indicated.

Of course, there’s no such automatic return for human surfers, says Julien Fuchs of CNRS and the Laboratory for the Use of Intense Lasers, in Palaiseau, France. It’s too bad, he muses: “I think they would like that.”

Still, the measurements alone didn’t pinpoint if shock surfing was responsible for the protons’ speedup. “The challenge is always in the interpretation, so what exactly caused that acceleration,” says plasma physicist Frederico Fiuza of SLAC National Accelerator Laboratory in Menlo Park, Calif., who was not involved with the research.

So Fuchs and colleagues created computer simulations of the experiment. Comparing the simulations and the real data suggests that the protons were surfing the shock wave.

“This is definitely an exciting result,” says plasma physicist Carolyn Kuranz of the University of Michigan in Ann Arbor. She says she hopes that further research would be able to uncover more direct evidence that doesn’t rely on computer simulations. “It’s very promising for future work.”