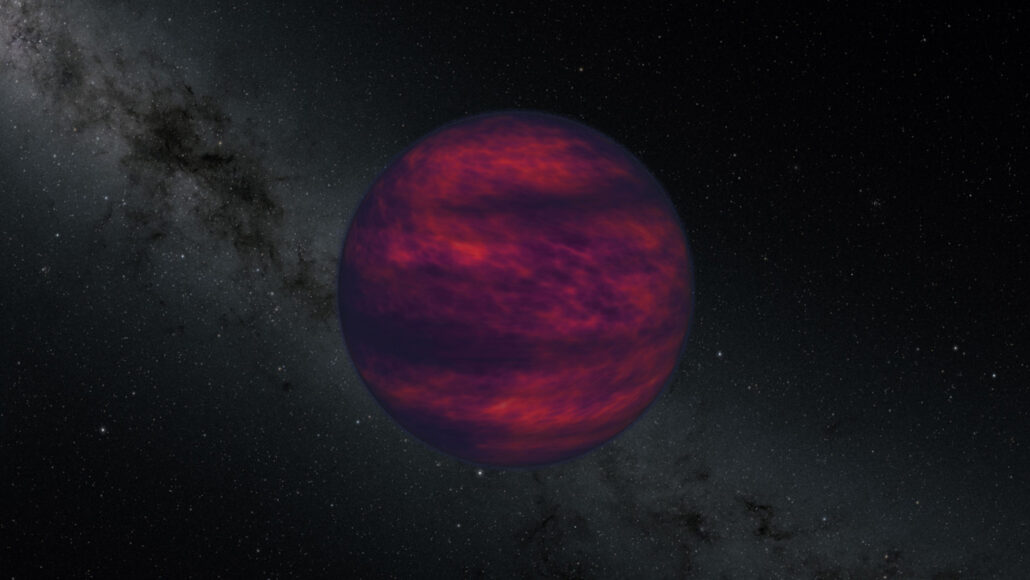 If you want to be a successful star by making the minimum possible effort, aim for a surface temperature about a quarter of the sun’s. This is the temperature that a new study says separates red dwarf stars, which shine for a long time, from failed stars known as brown dwarfs.

It’s often hard to distinguish between red and brown dwarfs, because when young they both look the same: red and dim. But only red dwarfs are born with enough mass to sustain the same nuclear reactions that power stars like the sun. In contrast, brown dwarfs glow red primarily from the heat of their birth, but then their nuclear activity sputters out, causing them to cool and fade. Now astrophysicists Dino Hsu and Adam Burgasser at the University of California, San Diego and their colleagues have discerned the dividing line between the two types by exploiting how they move through space.

When a star is born, it revolves around the Milky Way’s center on a fairly circular orbit. Over time, though, gravitational tugs from giant gas clouds, spiral arms and other stars toss the stars to and fro. These perturbations make the stars’ orbits around the galactic center more and more elliptical. Thus, the orbital paths of stars can reveal their approximate age.

Most red dwarfs are fairly old; their predicted lifetimes are far longer than the current age of the universe. But because brown dwarfs cool and fade, any that are still warm are young. Thus, on average, red dwarfs should follow more elliptical orbits around the galaxy than young brown dwarfs do.

In the new study, Hsu’s team analyzed 172 red and brown dwarfs of different spectral types, classifications based on the objects’ spectra that correlate with their surface temperatures. The researchers found that a sharp break in stellar motions separates warmer objects, which on average have more elliptical orbits and are older, from cooler ones, which on average have more circular orbits and are younger. This break appears at a spectral type between L4 and L6, corresponding to a surface temperature of about 1200° to 1400° Celsius (1,500 to 1,700 kelvins) — a fraction of the sun’s surface temperature of about 5500°C (5,800 K) — the team reports July 5 at arXiv.org.

Above this critical temperature, the dim suns are a mix of long-lived red dwarfs and young brown dwarfs. Below this temperature, though, “it’s all brown dwarfs,” Hsu says. These are the failed stars that are fated to fizzle out. The study will appear in a future issue of the Astrophysical Journal Supplement Series.

This new method for detecting the temperature boundary between red and brown dwarfs is intriguing, but the result is tentative, says Trent Dupuy, an astronomer at the University of Edinburgh who was not involved in the work. “It’s right around where you would expect,” he says. Dupuy says additional red and brown dwarfs should be observed to verify the finding.

Hsu agrees: “We need a more complete sample.” Expanding the sample will be both easy and hard. On the positive side, red dwarfs abound, outnumbering all other stellar types put together, and brown dwarfs are also common. On the negative side, though, red and brown dwarfs are faint. That makes measuring their Doppler shifts, which reveal how fast the objects move toward or away from Earth, a challenge. But knowing this motion is essential for calculating a star’s orbital path around the galaxy.