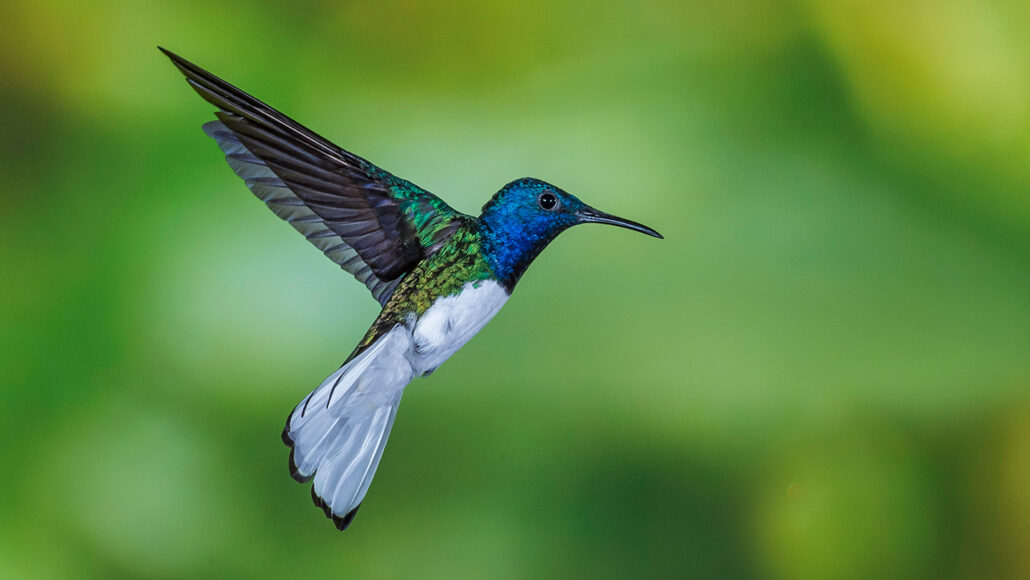 Female hummingbirds may sport flashy feathers to avoid being harassed

Some female hummingbirds don flashy feathers to avoid being bothered by other hummingbirds, a new study suggests.

Male white-necked jacobin hummingbirds (Florisuga mellivora) have bright blue heads and throats. Females tend to have more drab hues, but some sport the blue coloring too. Appearing fit and fine to impress potential mates can often explain animals’ vibrant colors. But mate choice doesn’t seem to drive these females’ pretty plumage since males don’t appear to prefer the blue females. Instead, bright colors may help lady birds blend in with the guys, and as a result, feed for longer without harassment from other hummingbirds, researchers report August 26 in Current Biology.

To begin investigating why some female jacobins have colorful blue plumage, Falk and colleagues captured and released over 400 of the birds in Gamboa, Panama, using genetics to determine their sex. Most females had drab colors — olive green heads and backs and mottled throats. But nearly 30 percent of females had the shimmery blue noggins that all juveniles have and that are characteristic of adult males.

These birds develop the bright colors in their adolescence, when the birds aren’t yet looking for mates, and for some lady hummers, the colors persist into adulthood when most females drop the bright colors. If these colors in females were driven by mate choice, then this is “the exact opposite of what you would expect,” says Falk, who did the work while at the Cornell Lab of Ornithology and the Smithsonian Tropical Research Institute in Gamboa.

In another experiment, the team set a taxidermy bird that was either a drab female, male or a blue-headed female at each of a pair of hummingbird feeders and compared how live birds reacted to the stuffed dummies. Male birds seemed to prefer drab-looking females, sometimes performing swooping courtship dives (SN: 4/12/18). Visitors to the feeders more frequently attempted to mate with green female body doubles than males or females with male-mimicking blue coloration.

White-necked jacobins can also be very aggressive, Falk says. Personality-wise, they’re “like the show-off jocks of the hummingbird world.” At the feeders, preserved females with dull green hues more frequently endured attacks when the feeder next door featured a stuffed male or a blue-colored female. Harassment came not only from jacobins but also from other hummingbird species, suggesting an even greater benefit of bright colors. “It’s really cool that these other species are paying attention to the differences between males and females,” Falk says.

The researchers next implanted tiny tracking tags into wild birds so that the team could tally up birds’ time at feeders that detected the tags. Brightly colored females made more visits to feeders, particularly ones with more sugary nectar, and spent more time there than their muted counterparts, the researchers found.

Being able to fly under the radar and eat in peace more frequently may make the brighter female birds more fit than other females. “Hummingbirds have the highest metabolic rate of any vertebrate on Earth,” says Ola Fincke, an evolutionary biologist at the University of Oklahoma in Norman who was not part of the study. Greater access to better food could make those animals healthier, though the new study looked only at hummingbird feeders, and it’s not clear whether the same trend would apply to foraging from flowers in the wild.

Though it’s not clear yet what drives such feather finery — whether genetics, hormones or something else — this is an “exciting example” of an evolved trait that helps females blend in with males to avoid harassment, says Sara Lipshutz, an evolutionary biologist at Loyola University Chicago who was not involved with the work.

The study also helps put the focus on female birds, which haven’t garnered as much research attention as males. For a long time, Lipshutz says, researchers “have been ignoring females — 50 percent of vertebrate animals.”