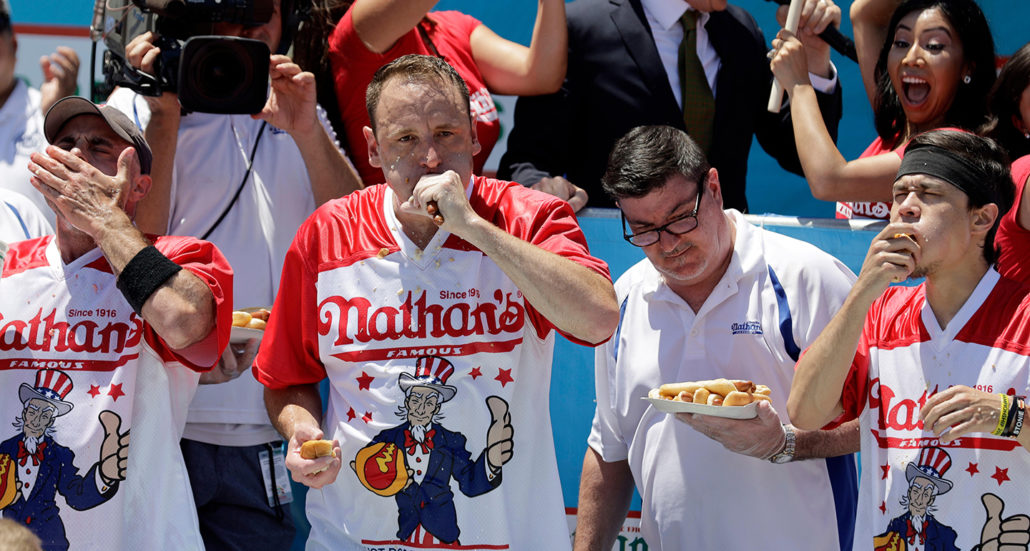 In the race to scarf down as many hot dogs as possible in 10 minutes, competitive eaters may have a limit: 83 franks, buns and all.

That’s according to an analysis of nearly 40 years of the storied Nathan’s Famous Coney Island Hot Dog Eating Contest. Started in the 1970s in New York City, the contest now is a televised international event. The current record of 75 hot dogs — set in July — is an improvement over the competition’s early days, where winners were crowned after eating a measly dozen or so dogs.

James Smoliga, a physiologist at High Point University in North Carolina, was watching the hot dog eating contest in 2019 when an idea struck him: Could he apply the mathematical equations used to estimate the limits of athletic performance to feats of gluttony?

Smoliga dug into the hot dog record books. Based on data from 152 competitors over 39 years, he calculated an upper hot dog limit of about 83 hot dogs in 10 minutes. That translates to a consumption rate of about 832 grams per minute (and more than 23,000 calories total), Smoliga reports online July 15 in Biology Letters.

Whether or not competitive eaters ever reach that limit, the scale of improvement “completely dwarfs other athletic achievements,” Smoliga says. Record performances in sports like track and field have improved about 40 percent since record keeping began, whereas hot dog eating prowess has improved approximately 700 percent.

Humans even hold their own, pound for pound, against other meat-eating animals. When normalized for body mass, competitive hot dog eaters have a consumption rate that bests that of grizzly bears and coyotes, Smoliga reports, though wolves lead the pack.

Eating large quantities of food quickly can be a useful strategy for carnivores when food is scarce. And Smoliga says humans’ capacity for a relatively high consumption rate may have proved useful at some point in our evolutionary past. But nowadays, inhaling six or seven hot dogs a minute for 10 minutes mostly leads to digestive problems, and if you’re lucky, the coveted Mustard Belt of champions.