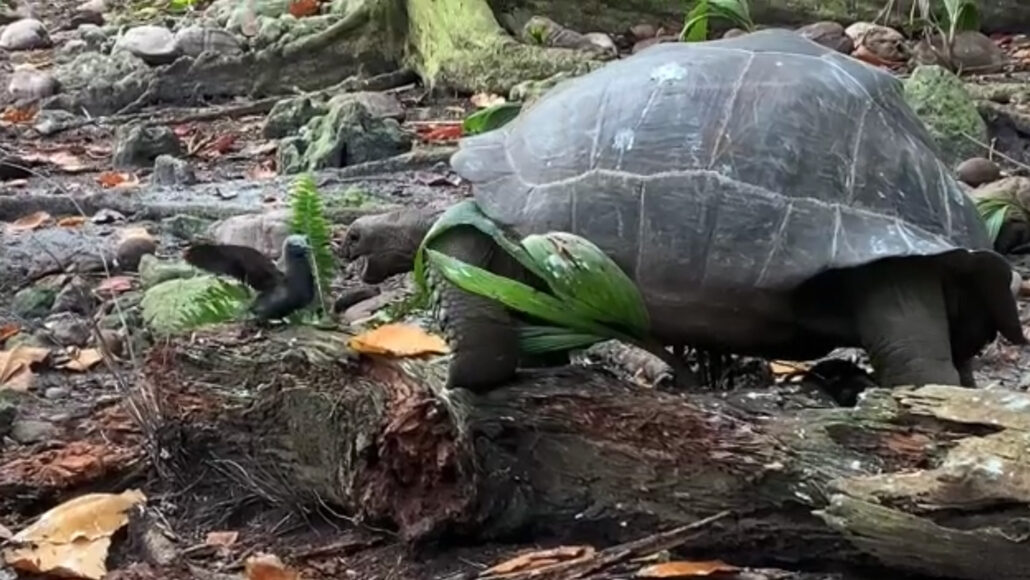 A giant tortoise was caught stalking, killing and eating a baby bird

Justin Gerlach thought there must be some sort of misunderstanding.

Tortoises don’t hunt. These gentle, lumbering herbivores spend their days leisurely munching on greenery, not stalking prey. His colleague’s report must be mistaken.

But the video was indisputable. On a summer evening in 2020, a female Seychelles giant tortoise (Aldabrachelys gigantea) spent several minutes stalking a young noddy tern (Anous tenuirostris) that had fallen from its nest on Frégate Island in the Seychelles, an archipelago off of East Africa. With plodding determination, the tortoise forced the chick’s retreat down a log, like a pirate walking the plank, until the bird had nowhere to go.

“This was totally unexpected,” says Gerlach, a biologist at the University of Cambridge. Watching the video was “amazing and slightly horrifying.” The footage was captured by coauthor Anna Zora, the conservation and sustainability manager of Frégate Island Sanctuary, the island’s nature reserve.

Many herbivores will opportunistically scarf down carrion for protein, Gerlach says. And anecdotes of tortoises eating small birds that the reptiles have crushed occasionally surface, “but it’s unclear whether these are deliberate [actions], or they just stepped on something,” he says. Most prey can outrun tortoises, rendering hunting futile. But this grounded noddy tern chick proved easy pickings.

While too young to fly, Gerlach says, the bird could have easily escaped on foot. “But because it’s a tree-nesting bird, ground is a dangerous place.” Once on the log, the chick probably clung to what it knew, he says.

Gerlach suspects that this tortoise has hunted before, as its deliberate movements betray prior experience. He plans to investigate whether such hunting behavior occurs with any regularity, but even just this one video has changed his view of these reptiles.

“[People] don’t think of tortoises as having very interesting behaviors,” he says. “This shows there’s an awful lot more to them.”