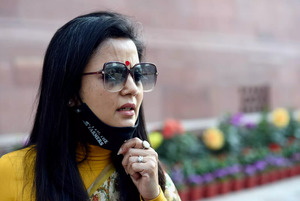 By lutra on 07.06.2021
West Bengal Governor Jagdeep Dhankhar on Monday said TMC MP Mahua Moitra’s allegation that his family members and other acquaintances have been appointed as OSDs in Raj Bhavan was “factually wrong” and described it as a “distraction strategy” to divert attention from “alarming law and order situation” in the state. He said six officers on special duty are not part of his close family. “Assertion @MahuaMoitra in tweet & media that six coterminous appointee OSDs in personal staff are relatives is FACTUALLY WRONG. OSDs are from three states and belong to four different castes. None of them is part of close family. Four of them are not from my caste or state,” Dhankhar said on Twitter. “This is unfolding of ‘distraction strategy’ to divert attention from alarming law and order scenario @MamataOfficial,” he said.

The governor also said he “would continue undeterred and with zeal to serve the people of state and vindicate my oath of office under Article 159 of the Constitution”. Moitra had on Sunday addressed Dhankhar as “uncle-ji” and alleged that his family members and other acquaintances have been appointed as OSDs in Raj Bhavan. Taking to the microblogging site, Moitra had shared a list of names — OSD to governor Abbhudoy Singh Sekhawat, OSD-coordination Akhil Chowdhury, OSD-administration Ruchi Dubey, OSD-protocol Prasant Diksit, OSD-IT Koustav S Valikar and newly appointed OSD Kishan Dhankar. The TMC MP had also said Sekhawat is the son of Dhankhar’s brother-in-law, and Ruchi Dubey and Prasant Diksit are respectively wife and brother of his former aide-de-camp (ADC) Major Gorang Diksit. Valikar is the brother-in-law of present ADC Janardan Rao, while Kishan Dhankar is another close relative of the governor, Moitra added.