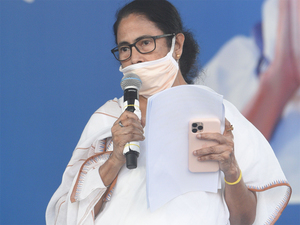 By lutra on 01.01.2021
KOLKATA: The Trinamool Congress on Friday celebrated its 23rd Foundation Day across West Bengal with Chief Minister and party supremo Mamata Banerjee asserting that she will fight and work for the people.Senior TMC leaders hoisted the party flag at its state headquarters and congratulated workers for their tireless efforts in serving people.”As Trinamool turns 23 today, I look back at the journey we began on January 1st, 1998. Our years have been of immense struggle, but throughout this time, we have continued to achieve our objective of being committed to the cause of only the people.” Banerjee said on Twitter.As West Bengal steps into the election year and the party is set to complete a decade in power, Banerjee vowed to carry on her fight to make the state better.”On #TMCFoundationDay, I extend my sincere gratitude to our Maa-Mati-Manush and all our workers who continue to fight with us in making Bengal better and stronger each day. The Trinamool family will carry on with this resolve for times to come!” she said on the microblogging site.The TMC had issued instructions to its workers to conduct various programmes across the state to mark the occasion.

The TMC leaders in districts have arranged for various functions and street-corner meetings to discuss and highlight the party’s achievements in the last ten years.Banerjee broke away from the Congress and formed the TMC on January 1, 1998 with an objective to oust the then Left Front regime from power.The party achieved its goal in May 2011 after forging an alliance with the Congress.The party faces a challenge in the next assembly elections, as the resurgent BJP has pulled out all the stops to defeat the TMC dispensation in the polls, slated to be held in April-May this year.