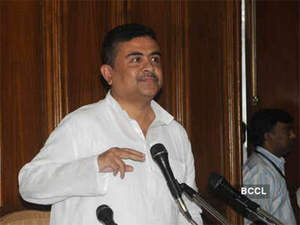 By lutra on 10.06.2021
BJP leader Suvendu Adhikari met Prime Minister Narendra Modi on Wednesday and told media persons that post-poll violence being allegedly inflicted by the ruling All India Trinamool Congress (AITC) on BJP supporters was the most important concern for the party.“The party has a presence across states and every karyakarta (worker) will speak out against what is happening in Bengal. The party and its supporters are ideological and the sanatanis have voted for the party….we will not face this lying down,” Adhikari said, claiming that 45 BJP workers had lost their lives in the violence. He said PM Modi was aware of the situation in West Bengal and had a 45-minute conversation with him.

The BJP has decided to launch a state-wide agitation from June 23 to protest against the post-poll violence in West Bengal.Adhikari termed it “communal violence” although a majority of the FIRs lodged have Hindus as accused, and claimed that it was “mainly Rohingyas and Bangladeshis” who were attacking the Hindus. He also said the BJP had managed to get 20% of the anti-incumbency votes. The upcoming moves by Bengal BJP, he said, were to “make the TMC understand that it has to follow rules of the land”.In his two-day visit to Delhi, Adhikari also met BJP president JP Nadda and ministers Dharmendra Pradhan and Mansukh Malviya. He met home minister Amit Shah the second time in two days, and extended his departure by a day. In the afternoon, after meeting the PM, he went to MP Saumitra Khan’s residence, where Khan and Barrackpore MP Arjun Singh had a meeting with him to strategise the party’s plan to corner the AITC. He also met agriculture minister Narendra Singh Tomar to complain against the alleged use of MGNREGA programme by AITC.Adhikari refused to answer questions on speculation that senior BJP leader and one of the earliest defectors to the party from AITC, Mukul Roy, has not spoken against his former party or the controversial post by former minister Rajib Banerjee on Monday had criticised the party’s attack on the AITC.A senior BJP leader said the concern right now is to hold the party together and work on building the confidence of party workers which stands shaken.“False cases are being registered against BJP workers and there is clear hounding of supporters. Senior leaders are skipping party meetings. There is worry in the minds of party workers, particularly with regard to hounding if this will go on for five years,” said a functionary, who did not wish to be identified. He said the disappearance of many candidates from the constituencies immediately after the results had also upset the cadre.On Tuesday, the BJP’s state unit had set up a disciplinary action committee with an intent to curb anti-party activities to check on dissenting voices.AITC leaders have said that Adhikari was in Delhi to clear his name of Narada case investigations that recently brought in the arrest of three AITC leaders. While the BJP has claimed the number of the deaths due to post-poll violence is more than 50, and hundreds of people have been displaced, the state administration has claimed 16 lives have been lost.Trinamool Congress spokesman, Rajya Sabha member Sukhendu Sekhar Roy, said the BJP and Adhikari were making “wild allegations” with regard to post-poll violence in the state that he said had occurred after the results were announced when the law and order was still under the Election Commission.“It is the BJP that brought in hundreds of its workers from other states and made them camp here for days in lodges and five-star hotels. The state is peaceful now. Even a few stray incidents that took place have stopped as the state administration took strict action,” said Roy.