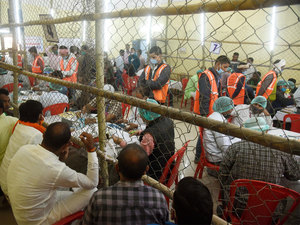 By lutra on 02.05.2021
The Congress is leading in two seats and the BJP in one seat in the initial rounds of counting of votes for three assembly seats in Rajasthan. According to the Election Commission of India (ECI) statistics, BJP’s DeeMaheshwari is leading on the Rajsamand seat with 49.82 per cent of votes in her favour, whereas rival Congress’ Tansukh Bohara has so far got 46.43 per cent of votes. On Sahada and Sujangarh seats, Congres’ candidates Gayatri Trivedi and Manoj Kumar are leading with 58.19 and 40.38 per cent of votes in their favour, leaving behind BJP’s Ratanlal Jat (32.08) and Khemaram (25.01) on the two seats, respectively.

An ECI spokesman said that 4/30 rounds in Sujangarh, 7/25 rounds in Rajsamand and 5/28 rounds in Sahada have been completed till 10 am. A total of 60.37 per cent of voters had exercised their franchise in the elections held on April 17 in Rajsamand, Sujangarh and Sahada assembly seats of the state.