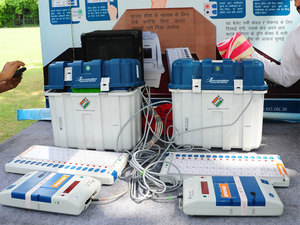 By lutra on 11.04.2021
TIPRA Motha has won the Tripura Tribal Areas Autonomous District Council elections, in a major jolt to the ruling BJP-Indigenous People’s Front of Tripura (IPFT) alliance in the state.This is the first electoral defeat for the BJP in the state after it came to power in 2018 decimating the CPI (M)-led Left Front, which had ruled the state for 25 years.TIPRA Motha, headed by Tripura’s royal scion Pradyot Bikram Manikya Deb Barman, has won 18 seats, while the BJP has bagged nine and an independent has sailed through in one seat.
#Elections With

The autonomous district council has 28 members and comes under the Sixth Schedule of the Constitution. Polls were held on April 6.Several tribal-based parties, including Nationalist Party of Tripura (INPT), were instrumental in forming the indigenous tribal-based party. The Left Front, the Congress as well as other parties had also fielded candidates for the 28 seats.In the autonomous district council elections held in 2015, the BJP had been runners-up in several seats while the Left Front had swept the polls. The Council encompasses over two-thirds of Tripura’s 10,491 square kilometre area with a population of about 1.2 million people, of which 90% are tribals.