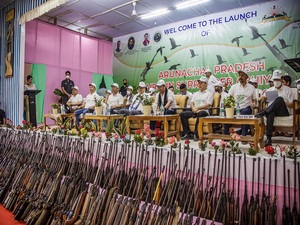 By lutra on 04.04.2021
More than 300 Air Guns were surrendered at Pasighat during the launch of ‘Air Gun Surrender Abhiyan’ .The department of Forest and Environment here in presence of Chief Minister Pema Khandu, Union MoS for Sports and Youth Affairs Kiren Rijiju, state Forest & Environment Minister Mama Natung attended the event. The ‘abhiyan’ is an initiative of the state government to dissuade hunting and create awareness on ill-effects of killing wildlife.
#Elections With

Appreciating the people for responding overwhelmingly on a short notice, Khandu said for the campaign to be successful, it has to emerge as people’s movement and requested all community based organisations to play an active role.“In the earlier days, we hunted for food. But times have changed. We have food available and hunting isn’t a necessity now,” he pointed.Khandu asserted that killing of birds need to be stopped outright especially in Pasighat area.

“We have witnessed destruction of large areas of paddy fields in the area by pests and insects. The fact that birds control their population cannot be denied. May be, we are guilty of downsizing the birds population and thus the famine-like situation,” he observed.He further said that the campaign will be far from successful if people do not pledge ‘not to eat wild meat’. He said that more often than not the urge to hunt emerge from financial needs.“Till we savour wild meat, people will hunt. Until and unless we pledge not to eat wild meat, hunting will continue no matter how many more air-guns are surrendered in such events,” he said.The Chief Minister also raised the issue of traditional hunting during ‘Unying Aran’, a very important festival of the Adis.“I have specially come here to appeal to my Adi brothers, who belong to one of the most educated and socially advanced communities of the state, to do a brainstorming on the hunting practice during Unying Aran,” he said.Khandu said that hunting during the festival is an ancient practice and cannot be stopped by any legal or government order but has to be pondered upon by elders and youngsters alike.“I particularly urge the Adi Bane Kebang (ABK) to discuss the issue on a positive note for preservation and conservation of wildlife and the environment,” he said.Meanwhile, the Chief Minister congratulated Siluk village for becoming the first garbage-free village of the state.Earlier in the day, the Chief Minister along with Rijiju inaugurated the Block II and Block III of boys hostel of 100 bed each. Khandu had sanctioned the said projects during his visit to the college in 2017. He also inaugurated the Administrative Building of the upcoming Arunachal University, the first and lone state university.