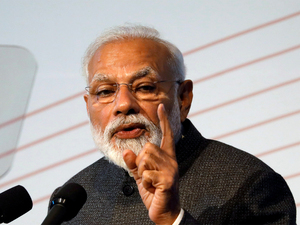 By lutra on 24.12.2020
NEW DELHI: India is the only major country which is moving in the right direction to achieve the targets of the Paris Agreement, said Prime Minister Narendra Modi on Thursday while adding that India is leading the world in environmental protection through international solar alliance.PM Modi attended the centenary celebrations of Visva-Bharati University in Shantiniketan, West Bengal, via video conferencing today.”Our country is spreading the message emanating from Visva-Bharati to the whole world. India today is leading the world in environmental protection through international solar alliance. India is the only country today which is on the right path to achieve the Paris Accord’s environmental goals,” said PM Modi during his address.”Visva-Bharati’s hundred-year journey is very special. Visva-Bharati is a true embodiment of Gurudev’s contemplation, vision and hard work for Maa Bharti. This is an adorable place for India, which gives continuous energy to the country to embody the dream that Gurudev had dreamed,” he added.The Prime Minister further stated, when we talk of freedom struggle, the idea of 19-20 century comes directly to our mind.”But it is also a fact that the foundation of these movements was laid long ago. India’s independence movement got energy from many movements that had been going on since centuries,” he added.

“The Bhakti movement strengthened the spiritual and cultural unity of India. In the Bhakti era, every region of India, every area, east-west-north-south, our saints in every direction, mahants, the Acharyas tried to keep the nation’s consciousness awake,” said PM Modi.Bhakti movement was the door which filled struggling India with collective consciousness and confidence for centuries, the Prime Minister stated.”This topic of devotion cannot proceed until we speak about Shri Ramakrishna Paramahamsa is discussed. The great saint, because of whom India got Swami Vivekananda,” said PM Modi.”He began to see divinity in every person while expanding the scope of devotion. He also gave expression to Karma, stressing the creation of individual and institution,” he added.Along with the period of hundreds of years of Bhakti movement, Karma movement also took place in the country, the PM said.”The people of India were fighting slavery and imperialism. Be it Chhatrapati Shivaji, Maharana Pratap, Rani Lakshmibai, Rani Chennamma of Kittur, Lord Birsa Munda’s armed struggle. The karma-rigorous cultivation of tenacity and sacrifice of ordinary citizens against injustice and exploitation was at its peak. This became a major inspiration of our freedom struggle in future,” he added.”The need of the hour was to create an ideological movement to win the war of independence on the establishment of knowledge and at the same time prepare a new generation for the creation of a bright future India. And many prestigious educational institutions and universities played a big role in it,” the Prime Minister said.These educational institutions gave new energy, gave new direction, gave new height to the ideological movement going on for India’s independence, the Prime Minister said.”We united with the Bhakti movement, The Gyan movement gave intellectual strength and Karma movement gave us the courage and courage to fight for our right,” he added.Founded by Gurudev Rabindranath Tagore in 1921, Visva-Bharati is also the oldest Central University in the country. In May 1951, Visva-Bharati was declared to be a Central University and an Institution of National Importance by an Act of Parliament.The University followed the pedagogy devised by Gurudev Tagore, though gradually it evolved in the format in which modern Universities developed elsewhere. The Prime Minister is the Chancellor of the University, a Prime Minister’s Office (PMO) release stated.