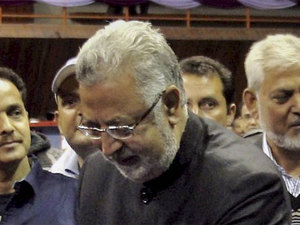 By lutra on 23.12.2020
Jammu: Five out of the seven former ministers who contested the DDC election in Jammu and Kashmir have won, while two belonging to the BJP suffered defeats, according to data issued by the state election authority (SEA). Senior Congress leader and former minister Taj Mohiuddin, who was in the fray for Parenpillan constituency of Uri tehsil in north Kashmir’s Baramulla district, won the seat with a margin of 1,596 votes, officials said. Taj, who held several terms as minister and MLA, polled 9,741 votes against the Peoples Conference (PC) leader Shaukat Ali Khan, who got 4,451 votes in the first-ever District Development Council (DDC) election. Mohiuddin, the 72-year-old Gujjar leader who is facing CBI probe into the Roshi land scam, fought against Khan. Supported by Farooq Abdullah’s Jammu and Kashmir National Conference (NC) and Mehbooba Mufti’s J&K Peoples Democratic Party (PDP), Mohiuddin is the consensus candidate from the People’s Alliance for Gupkar Declaration (PAGD). Known as the Congress’ ‘crown’, Taj has represented Uri thrice as MLA. He has functioned as a cabinet minister in the governments of Mufti Mohammad Sayeed, Ghulam Nabi Azad and Omar Abdullah.

Veteran NC leader and former minister Abdul Gani, who contested from Mahore seat in Reasi district, won the election by a margin of 351 votes. He polled 4,833 votes and defeated independent candidate Shafi-ur-Rehman, who got 4,482 votes. Gani has been MLA and a former minister in the Omar Abdullah government. Jagjeevan Lal, a senior NC leader and former minister, won the Reasi seat by defeating BJP’s Chaman Lal by 237 votes. Lal polled 4,507 votes against Lal’s 4270. Former Congress minister and veteran Gujjar leader Ajaz Ahmed Khan, who joined the J&K Apni Party, won the DDC election from Thuroo segment of Reasi district by 1,578 votes, according to the SEA data. Ajaz Khan polled 4,904 votes, while Mohmmad Ashraf of the NC polled 3,326 votes. A two-time MLA, Ajaj Khan was a minister in the NC-Congress government. A veteran Pahari leader and former Congress minister, Shabir Ahmed Khan won the Manjakote seat in Rajouri district with a margin of 3,394 votes as he polled 8,714 votes against Shafat Khan, who got 5,320 votes. Shabir Khan was minister in the NC-Congress led Omar Abdullah government. Former BJP ministers Sham Lal Choudhary and Shakti Raj Parihar, however, lost their seats from Jammu and Doda districts. Choudhary lost his election in Suchetgarh constituency of Jammu district by 11 votes, which according to the officials is the “smallest” margin so far in the DDC polls. Choudhary polled 12,958 votes against independent candidate Taranjit Singh, who polled 12,969 votes. A cabinet minister in the BJP-PDP coalition government in the erstwhile state of Jammu and Kashmir, Choudhary had won the assembly election from Suchetgarh constituency in 2008 and 2014 and is considered to be a powerful leader in the border belt of R S Pura. Another former minister of the Bharatiya Janata Party (BJP), Shakti Raj Parihar lost both the seats he contested from Gundna and Marmat segments of Jammu and Kashmir’s Doda district. Parihar lost to NC candidate Asim Hashmi by 1,336 votes. Hashmi polled 7,835 votes, while Parihar 6,499, according to the data. Parihar lost the Marmat seat by 1,330 votes as he polled 7,033 votes against Congress candidate Mushtaq Ahmed, who polled 8,363 votes. Parihar, who was the vice president of BJP’s J&K unit, is considered to be an important player in the region and was a minister in the BJP-PDP government. Former BJP MLAs Gharu Ram and Bharat Bushan won their seats in Jammu district, while former legislators Kanta Andhotra, Shahnaz Ganai, Shah Mohmmad Tantray and Mumtaz Khan lost their election. The PAGD swept the maiden DDC polls by winning 110 seats, while the BJP emerged as the single largest party by getting 74 seats after securing the largest vote share in Jammu and Kashmir, officials said on Wednesday. The results of four constituencies – one each in Bandipora and Kupwara districts of north Kashmir and Poonch and Rajouri districts in Jammu region – were awaited.