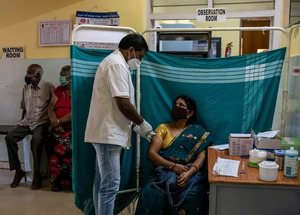 By lutra on 09.06.2021
Thayamma (90) visited a public health centre (PHC) at a village in Kollegal taluk of Chamarajanagar district in Karnataka last week with her son to get her second Covid-19 vaccine shot. The health workers there could not vaccinate her as they got only three people – seven short to open the vial with 10 doses.The turnout was thin the next day too. But this time they vaccinated the four people waiting and took the remaining vial to a neighbouring village to exhaust the stock, said Thayamma’s son, Sundar Raj, a teacher.Across the border in Tamil Nadu, the owner of a construction firm said his workers have stayed off. “They strongly believe vaccines produce side effects and they are safe without one.” His attempts to convince them have been in vain, he said.

Parts of rural Karnataka and Tamil Nadu are battling vaccine hesitancy, thanks to misinformation swirling around on the social media and word-of-mouth campaign. For example, doubts were fuelled by speculations following the death of popular Tamil actor Vivek. Rumours flew thick that he breathed his last after he got his vaccine a day earlier. The information spread like wildfire with WhatsApp forwards resulting in a setback to the vaccine drive.Officials and elected representatives are trying hard to convince people as the country struggles to come out of the calamitous second wave. A health official in Karnataka’s Yadgir district said he found villagers to be quite “indifferent” to vaccination. “It could also be because there have been fewer deaths in rural areas and a good recovery rate which has probably increased their confidence levels. They wonder why they need vaccines in the first place,” she said. “I have asked my health staff to vaccinate even if there are just five people. Once you turn them away for lack of beneficiaries, they lose interest,” said a health officer in Ballari district. Chamarajanagar district in-charge minister S Suresh Kumar said they are trying to vaccinate gram panchayat members in remote villages first so that their followers will shun hesitancy. “When elected representatives in villages lead a campaign, others will listen,” he said. However, officials in Telangana and Andhra Pradesh claimed they have not faced vaccine hesitancy. “Thanks to increased awareness among people in rural areas and efforts of the village volunteers to organise vaccination, we did not see any vaccine hesitancy,” said an official in the AP chief minister’s office. Dr H Sudarshan, founder of Karuna Trust and a public health expert, said it was time for the government to launch campaigns to create awareness in rural India. “In all the past vaccination drives, the government used to carry out immense information, education & communication (IEC) activities which I do not see happening this time.”

While the country continues its battle against second wave of COVID, a massive vaccination drive held in Hyderabad on June 6 by Medicover hospitals in association with Cyberabad council and Cyberabad police. The main of aim this drive is to vaccinate over 40000 people in a single day to defeat the third wave of COVID-19.