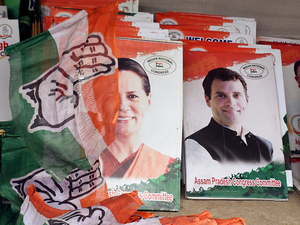 By lutra on 03.05.2021
Trinamool and DMK victories on a day Congress’s electoral ride came a cropper are expected to provide impetus to ongoing efforts of regional satraps to come together against the BJP in the run up to the 2024 Lok Sabha polls. One likely, if not intended, fallout would be the regional forces’ negation of Congress as the national pivot for anti-BJP unity, some persons involved in the move said.ET had reported that a group of regional leaders, with NCP chief Sharad Pawar as common friend, have been exploring such a common front of regional parties against the BJP, with some of them preferring Congress to play second fiddle, while some are for compelling it to extend support to them. Some of them envisage a ‘new era United Front exercise’, which was backed by the Congress in the name of keeping the BJP out.The latest round of electoral setback not only weakens the Congress position within the larger opposition turf but also that of the Gandhis, especially as their capacity to win votes and keep Congress united have increasingly come under the scanner even internally. Asked about the possible move of regional parties to unite in the wake of Trinamool leader Mamata Banerjee’s splendid victory, AICC spokesperson Randeep Surjewala stressed on the importance of the Congress’ “strong leadership role in national politics” and that there could not be a “one-size-fit-all” approach.
#Elections With

After Sunday’s verdict, a host of regional leaders including NCP’s Sharad Pawar, Shiv Sena’s Uddhav Thackeray, RJD’s Lalu Prasad and non-Congress allies Akhilesh Yadav of SP, Mayawati of BSP, NC’s Omar Abdullah and PDP’s Mehbooba Mufti hailed Banerjee’s (and many also Stalin’s) electoral show. Many of the leaders, besides Badalas of Akali Dal, Chandrashekhara Rao of TRS, Jagan Mohan Reddy of YSRCP and JDS, too have been part of the behind the scene talks for a kind of anti-BJP federal platform. Many of these regional parties had demonstrated disproval of Congress and Left ‘splitting the anti-BJP vote’ in Bengal. Some say, a regional front can bring in larger anti-BJP unity unlike the Congress, which has turf-rivalry with many regional parties.Equally enthusiastic was Congress leaders Ghulam Nabi Azad, Anand Sharma, Shashi Tharoor, all part of change-seekers, in hailing Banerjee’s win. Sharma had publicly criticised the Congress decision to tie-up with a Muslim outfit in Bengal. The Congress leadership’s pact with AIUDF in Assam too has been a matter of heartburn for many Congress leaders who want an ‘equal fight against majority and minority communalism’.Aware of the tricky moves, the AICC was quick to showcase many of these regional leaders (Pawar, Banerjee, Mayawati, Stalin, Deve Gowda, Akhilesh Yadav, Abdullah and Left leaders) and Sonia Gandhi jointly issuing a statement demanding that the Centre ensure oxygen supply and make anti-Covid-19 mass vaccination programme and full utilisation of budgetary allocation for health. But some of them said this was more a humanitarian resolve and no political imprint should be seen in it.