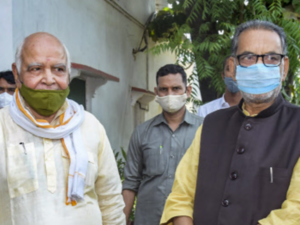 By lutra on 07.06.2021
BJP’s UP in-charge Radha Mohan Singh on Sunday downplayed talks about an urgent cabinet expansion/reshuffle in Uttar Pradesh and said that the chief minister will take the decision at the “appropriate time”. “Not many seats are vacant in the cabinet and for the few that are, a decision will be taken by the CM at the appropriate time,” Singh told reporters adding that the government and the organisation were working efficiently and in “complete coordination” and that even national general secretary BL Santhosh, who was here last week, had agreed to this fact. Singh said the BJP government in UP was the “most popular” government and the BJP organisation in the state was the “strongest”. He refuted claims that BJP workers were unhappy with the bureaucracy saying that in no other state had more than 17,000 workers been nominated to government committees.He expressed satisfaction with the BJP’s performance in the zilla panchayat elections and said that the “hegemony” of a single party (Samajwadi Party) was broken as they had to wind up with about 700 seats while a lot of independent candidates were on BJP’s side.

Singh was in Lucknow for the second time in less than a week and met the governor Anandiben Patel, triggering talks that discussions about a cabinet rejig could be on the agenda. He, however, dismissed the speculations saying it was merely a “courtesy” call since he had not met her after being appointed as UP’s BJP in-charge. He also met the Assembly Speaker Hriday Narain Dikshit. On Saturday, he had met the BJP UP president Swatantra Dev Singh and general secretary (organisation) Sunil Bansal.The matter relating to filling of vacant seats and changes in Chief Minister Yogi Adityanath’s Cabinet garnered attention with the stocktaking visit of national BJP leaders Santhosh and Singh to the state capital last week. There was also anticipation whether AK Sharma — an IAS officer turned MLC and Prime Minister Narendra Modi’s key aide –would be given a key berth alongside Yogi. Ministers ET had spoken with said that while a “major rejig” was unlikely with less than nine months to polls, some posts that fell vacant after the death of sitting ministers, which could be filled up.