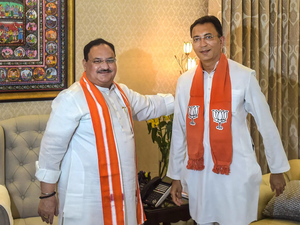 By lutra on 10.06.2021
On a day of fast-paced events, when speculation of a leading opposition figure joining BJP gripped the Capital, Congress leader Jitin Prasada made a dramatic entry at the BJP HQ. The former minister spoke to Akhilesh Singh about his decision to leave Congress and whether he will fit into BJP’s scheme of things. Excerpts from the interactionPriyanka Gandhi Vadra and other Congress leaders claim that their party is on the road to revival but you have chosen to quit.We are in politics and a party to live up to the expectations of the public at large and supporters. I wasn’t able to do so in Congress. Today, I feel privileged that I have joined the world’s largest political party. The sole purpose of politics is service to the people. However, I had this feeling for a long time that we have not been able to deliver what was expected of us. That vehicle to serve the people was nowhere. I don’t want to indulge in the debate of revival or not, my focus is that I have joined BJP and will work wholeheartedly for the party . Will you be able to adjust in a different ideological milieu?

The sole ideology of a politician is the interest of the nation, state, district and the region where you are active. PM Narendra Modi is selflessly serving the nation with the motto of ‘sabka saath, sabka vikas and sabka vishwas’. There cannot be a better ideology if a party talks about a new India, promising inclusive development involving all castes and communities. While contesting the Lok Sabha polls as a Congress candidate, I could sense that sentiments were overwhelmingly in favour of BJP. It’s not only about Uttar Pradesh but BJP’s and PM Modi’s popularity has surged across the country. BJP is the only national party at present in the country not only in terms of its reach but also because of its organisational set-up. I realised that BJP works as an institution and unlike other parties, doesn’t revolve around an individual. You have questioned BJP’s secular credentials on several occasions in the past.As an opposition leader, one must question the government and the ruling party. But the BJP leadership has responded with positivity, introducing welfare schemes which don’t apply to any particular caste or community. ‘Ek Bharat Shrestha Bharat’ means development of one and all. Do you think BJP will project you as the new Brahmin face in UP?I don’t think leadership in BJP is decided on caste basis, therefore, you should correct the question. As far as role and responsibility is concerned, it is for the party leadership to decide how to use me. Inspired by the party leadership, I have joined BJP without any conditions with the sole motive of serving the people. What was the final provocation to quit Congress?As I said earlier, we have been in Congress for three generations, therefore, such decisions can’t be taken on a provocation or a particular moment. I took the decision after long thinking and considerable deliberations. I had a feeling for a long time that I was not able to do what I intended to do. Therefore, there was no instant trigger but several days of thinking, planning before I finally made up my mind to join BJP. Have you met PM Modi and UP CM Yogi Adityanath?I have already met home minister Amit Shahji and party president Naddaji. I expect to meet other senior leaders soon to take their blessings