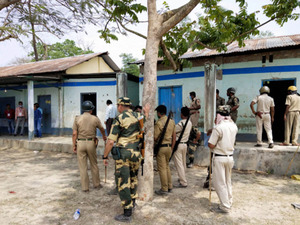 By lutra on 12.04.2021
The four people, who were killed in Sitakuchi booth firing on Saturday, were migrant labourers working in Kerala. They had come to their home state to vote. A day after the incident, the situation remained tense in the Booth 126 area even as a section of the villagers claimed that bombing continued on Saturday night. The bodies of the four persons were buried by their family members, police confirmed. The four people were killed when Central Industrial Security Force (CISF) personnel opened fire in “self-defence”, allegedly after coming under attack from locals who “attempted to snatch their rifles”. “The Trinamool workers, mostly from the minority community, were bombing at night. We were scared,” said a villager on condition of anonymity. Superintendent of Police-Coochbehar Debasishh Dhar told ET, “Last rites of the deceased were done. The situation is apparently to be under control.” Asked about claims of villagers about bombing and if any recovery was done, Dhar said, “In the last few days, we have recovered some crude bombs, splinters and materials which could be used to produce bombs. The process is on. On the day of the incident, bombs were also hurled and one person was injured.” Police said they had arrested one person named Zakir Hossain.Booth 126 has majority Muslim population while the Hindu and Rajbonshi population is miniscule.Sitting Trinamool MLA from 2011, Hiten Burman, told ET, “According to my knowledge, Booth no 126 is minority dominated with almost 90% Muslims while 10% are Hindus and Rajbonshis. If we consider Sitalkuchi constituency as a whole, the minority (Muslim) population is 26% while there are 52% Rajbonshi, and the rest are SC and other communities.”
#Elections With